What is Multi-Touch Technology and How Does it Work? 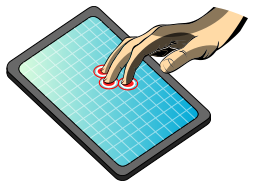 Most people are familiar with the general principle behind touchscreen technology: the interface works by determining the point of your touch, using this information to determine which icons or buttons the operator is pressing. But there are several different types of touchscreen technology, including multi-touch. Today, we’re going to take a closer look at multi-touch, revealing how it works and why it’s becoming such a popular choice among touchscreen manufacturers.

Multi-touch is essentially a type of technology that allows a device to recognize and process multiple touches simultaneously. Most touchscreen devices are only capable of recognizing a single touch. So if you attempt to place your fingers on two different areas of the device at the same time, it will only register the location touched by your first finger and not your second. Multi-touch technology is designed to eliminate this problem by supporting the use of multiple, simultaneous touches.

So, what benefits (if any) does multi-touch technology offer? Being able to identify multiple points of contact opens the doors to a while new world of applications and possibilities. Devices that support multi-touch technology, for instance, can be implement functionality like pinch-to-zoom, the activation of subroutines which are attached to gestures, additional controls and much more. Of course, this is really just the tip of the iceberg when it comes to the benefits of using multi-touch technology.

Typically, the multi-touch technology works in conjunction with an ASIC sensor that is fixed on the device’s surface. The sensor identifies the point or points of touch, relaying this information to the device’s on-board computer system.

You can find multi-touch technology being used in a wide range of different smartphones, tablets and other touchscreen-enabled devices, including both the iPhone and iPad. Apple, Inc. actually holds several patents related to the implementation of multi-touch technology. The tech giant event attempted to trademark the word “Multi-touch,” although this request was rejected by the Patent and Trademark Office, citing the reason of it being too generic.

What are your thoughts on multi-touch technology?